Meeting at Waterloo: The Lives and Legacies of Napoleon Bonaparte and Arthur Wellesley, the Duke of Wellington 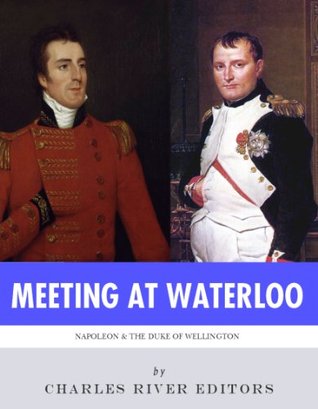 *Includes pictures of Napoleon, Wellington and important people, places and events in their lives.
*Includes maps of famous battles, including Austerlitz and Waterloo.
*Answers common myths about Napoleon, including whether he was short, whether his men shot off the Sphinx's nose, whether he played chess, and whether he was poisoned.
*Includes a Bibliography for further reading.
"Courage cannot be counterfeited. It is the one virtue that escapes hypocrisy." - Napoleon
"Believe me, nothing except a battle lost can be half so melancholy as a battle won." - Duke of Wellington, at Waterloo
Waterloo is the most famous battle in modern history if not all of history, and appropriately so. Gathering an army of 100,000 men, Napoleon marched into what is now Belgium, intent on driving his force between the advancing British army under the Duke of Wellington and the Prussian forces under Marshal Blucher. It was the kind of daring strategy that only Napoleon could pull off, as he had at places like Jena and Austerlitz. At Waterloo, however, it would end disastrously, as Napoleon's armies were unable to dislodge Wellington and unable to keep the Prussians from linking up with the British. The battle would end with the French suffering nearly 60% casualties, the end of Napoleon's reign, and the restructuring of the European map. Simply put, the next 200 years of European history can be traced back to the result of the battle that day in 1815.
When historians are asked to list the most influential people of the last 200 years, a handful of names might vary, but there is no question that the list will include Napoleon Bonaparte (1769-1821), the most successful French leader since Charlemagne and widely acknowledged one of the greatest generals ever. Indeed, Napoleon was likely the most influential man of the 19th century, leaving an indelible mark on everything from the strategy and tactics of warfare to the Napoleonic Code that drafted laws across the continent. To defeat Napoleon, the Europeans had to form large coalitions multiple times, which helped bring about the entangling alliances that sparked World War I after Europe was rebuilt following Waterloo and the Congress of Vienna.
By the time of his death, Wellington had been prime minister twice, a shrewd personal advisor to four British monarchs and one of the nation's most prominent politicians for three decades. But despite his nearly four decades of peacetime service in and out of politics, Wellington has remained one of the titans of the 19th century because of one June day in 1815. Then, as now, the Duke of Wellington is best remembered for defeating Napoleon in the most famous battle of modern history at Waterloo.
Even then, the fact Wellington is remembered for Waterloo belies his extraordinary military career, which saw him come up through fighting in the Netherlands and India before opposing Napoleon's forces on the Iberian Peninsula for several years. By the time Wellington took command of allied forces during the Hundred Days Campaign and decisively finished the Napoleonic Era at Waterloo, he had participated in about 60 battles and was one of Britain's greatest war heroes.
Meeting at Waterloo covers the lives and legacies of both leaders, including their fateful meeting in June 1815, but it also humanizes Napoleon and Wellington off the battlefield as well. Along with pictures of important people, places, and events, you will learn about Napoleon and Wellington like you never have before.