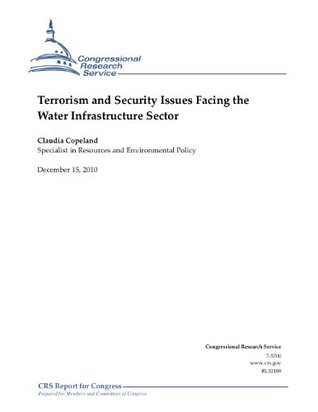 Damage to or destruction of the nation’s water supply and water quality infrastructure by terrorist attack or natural disaster could disrupt the delivery of vital human services in this country, threatening public health and the environment, or possibly causing loss of life. Interest in such problems has increased greatly since the September 11, 2001, terrorist attacks in the United States.

Across the country, water infrastructure systems extend over vast areas, and ownership and operation responsibility are both public and private, but are overwhelmingly non-federal. Since the attacks, federal dam operators and local water and wastewater utilities have been under heightened security conditions and are evaluating security plans and measures. There are no federal standards or agreed-upon industry practices within the water infrastructure sector to govern readiness, response to security incidents, and recovery. Efforts to develop protocols and tools are ongoing since the 9/11 terrorist attacks. This report presents an overview of this large and diverse sector, describes security-related actions by the government and private sector since 9/11, and discusses additional policy issues and responses, including congressional interest.

Policymakers have been considering a number of initiatives, including enhanced physical security, better communication and coordination, and research. A key issue is how additional protections and resources directed at public and private sector priorities will be funded. In response, Congress has provided $923 million in appropriations for security at water infrastructure facilities (to assess and protect federal facilities and support security assessment and risk reduction activities by non-federal facilities) and passed a bill requiring drinking water utilities to conduct security vulnerability assessments (P.L. 107-188). When Congress created the Department of Homeland Security (DHS) in 2002 (P.L. 107-297), it gave DHS responsibilities to coordinate information to secure the nation’s critical infrastructure, including the water sector. Under Homeland Security Presidential Directive-7, the Environmental Protection Agency (EPA) is the lead federal agency for protecting drinking water and wastewater utility systems.

Recent congressional interest has focused on two legislative issues: (1) security of wastewater utilities, and (2) whether to include water utilities in chemical plant security regulations implemented by DHS. In the 109th Congress, a Senate committee approved legislation to encourage wastewater treatment works to conduct vulnerability assessments and develop site security plans. Similar legislation was introduced in the 111th Congress (H.R. 2883). Congress also turned attention to legislation to extend DHS’s Chemical Facilities Anti-Terrorism Standards and, as part of that debate, whether to preserve an existing exemption for water utilities from chemical facility standards or to include them in the scope of DHS security rules. The House passed H.R. 2868 in November 2009, with a provision to require water utilities to use safer chemicals and technology, but the Senate did not act on that bill or a companion Senate measure, S. 3598.