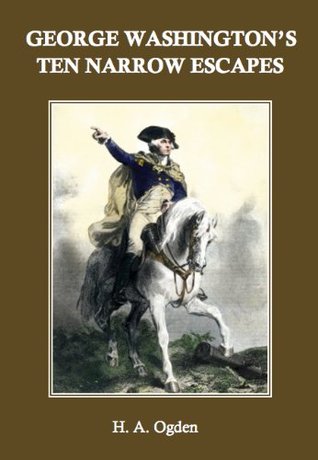 Originally published in 1910 in “St. Nicholas: An Illustrated Magazine for Young Folks,” this Kindle edition, equivalent in length to a physical book of approximately 16 pages, recounts ten perilous episodes in the life of George Washington in which the great national hero narrowly escaped death.

Introduction: A Brief Overview of the Life of Washington
I. A Treacherous Guide
II. A Narrow Escape from Drowning
III. An Unfought Duel
IV. Protected by the Indians’ “Great Spirit”
V. Threatened by a Poacher
VI. A Frustrated Plot
VII. In Peril at Kip’s Bay
VIII. Close to the Enemy at Princeton
IX. The Treacherous Host
X. A Generous Enemy

Sample passage:
Of all of Washington’s escapes perhaps the most marvelous (indeed, none more wonderful is told in history) was when he was acting as an aide of General Braddock, and that officer was defeated and his army put to rout at the Monongahela River, July 9, 1755. The story has often been told how the over-confident British general, heedless of all advice, with his two regiments of regulars and a few provincials, marched directly into the ambush laid for them by the French and their Indian allies. Hemmed in on every side by foes they could not see, the close ranks of the regulars were almost annihilated. Every officer except Washington was either killed or wounded. Brad dock, vainly trying to keep his men in line, was wounded mortally. The whole duty of giving the general’s orders had fallen upon Washington early in the engagement, and he rode everywhere in the thickest of the fight. Four bullets passed through his uniform, and two horses were killed under him, but, to the wonderment of all, he was unhurt. An Indian chief singled him out and shot at him many times and ordered his warriors to fire at him also, but, finding that their bullets took no effect, concluded that he was under the protection of Manitou, the Great Spirit, and finally stopped firing at him. Washington afterward wrote home, saying, “Death was leveling my companions on every side of me; but, by the all-powerful dispensations of Providence, I have been protected.”

About the author:
H. A. Ogden (1856-1936), an American illustrator and writer specializing in historical and military subjects, was a member of the New York Historical Society and the New York Illustrators Society.