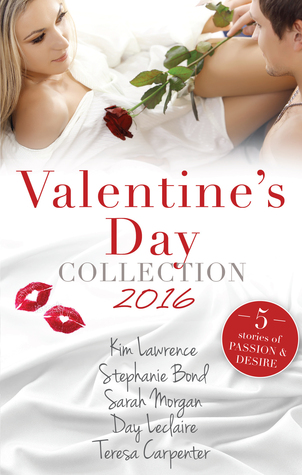 Natalie lives a tough life. Being a single mum and juggling a job is hard work. And her boss, Rafael Ransome, knows how hard she works…and comes up with a brilliant plan. Rafael will offer Natalie a stunning career move — a Valentine’s Day marriage proposal.

Carol Snow is tempted to rethink her vow of singleness when rugged co-worker Luke Chancellor shows her — in mind-blowing detail — what she’s been missing. But when he asks for a real date, Carol runs like hell… And turns up in the exact same day…having amazing sex with Luke! As the day repeats, Carol wants more than multiple one-night stands. Now, she has to figure out how to wake up with Luke in a new day!

The Seduction Challenge — Sarah Morgan
GP Joel Whittaker’s return to Cornwall to work in his father’s practice becomes more enjoyable when he meets the gentle nurse. Joel’s reputation with women is legendary and there’s something irresistible about Lucy Bishop. However, Joel’s family warns him to not seduce Lucy! So he decides he’ll just get to know her…and fight temptation to take her in his arms. But it’s a challenge that only gets harder.

Billionaire Lucius Devlin needs a wife after he inherits his best friend’s child. Preferably one who fulfils his every need… Angie Colter is compelled by sexy Lucius and baby Mikey. Then she discovers his goal — with a few changes, Angie will be the perfect wife! But what if Lucius discovers the truth about his nearly perfect fiancée?

A Pregnancy, A Party & A Proposal — Teresa Carpenter

Lauren Randall always has a plan. And getting pregnant after one hot night with Donovan is not part of it! Ray may be an award-winning director, but he’s definitely dad material. Posing as Ray’s date gives Lauren a chance to tell her secret…until his ailing grandmother announces their engagement. Now she’s his ‘fiancée’ and it’s hard to to pretend she’s not falling for her baby’s father…