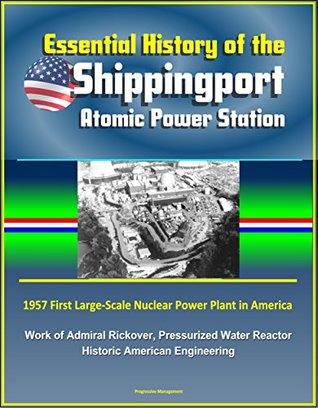 This excellent report has been professionally converted for accurate flowing-text e-book format reproduction. It provides an authoritative history of the Shippingport Atomic Power Station, which became operational in December 1957. This historic facility was the first large-scale central station nuclear power plant in the United States and the first plant of such size in the world operated solely to produce electric power; it was the first to have training classes for operators and supervisors; it was the first to use a water-cooled breeder core for a power plant.

At 4:30 a.m. on December 2, 1957, the Shippingport Atomic Power Station reached criticality, becoming the Nation's first large-scale central station nuclear power plant to attain a chain reaction. In Chicago, fifteen years earlier to the day, the Italian-born Nobel laureate Enrico Fermi had achieved the world's first self-sustained chain reaction, an event which is often accepted as the beginning of the nuclear age. Fermi and his associates had reached their goal by using a simple assembly of graphite, uranium metal, uranium oxide, and wood. The Chicago Pile was an experiment designed to prove the correctness of theoretical physics. Fermi and his team knew it would produce no useful power.

In contrast, the Shippingport reactor was a complicated piece of machinery, generating large amounts of heat, requiring an elaborate cooling system, depending upon materials which only fifteen years earlier had been laboratory curiosities, and relying upon sophisticated components and instruments which did not exist when Fermi conducted his experiment. The purpose of this plant was to demonstrate the feasibility of producing useful energy from the atom for civilian application and to advance civilian power reactor technology.

From conception through almost all of its operating life, Shippingport was the responsibility of Admiral H. G. Rickover, The Bettis Atomic Power Laboratory, often supported by the Knolls Atomic Power Laboratory, made technical recommendations but he and his organization made the key decisions. He carried his responsibilities, however, far beyond the realm of technology. To him the purpose of Shippingport was much more than the demonstration of the engineering feasibility of using atomic power for commercial application: the station was to establish standards for training personnel and to apply procedures for safe operation. These were to set an example for industry.