Counterpoint: The Journey of a Music Man 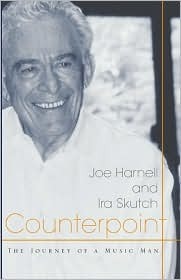 Counterpoint is the life story of Joe Harnell, Grammy and Emmy award-winning pianist, composer, arranger and conductor. He was musical director for such stars as Frank Sinatra, Maurice Chevalier, Marlene Dietrich, Judy Garland, Peggy Lee and Pearl Bailey, as well as The Mike Douglas Show. His smash hit instrumental record of "Fly Me to the Moon" was a landmark, setting a new standard of performance in the record business. Among many others, he composed and conducted the scores for TV series like The Incredible Hulk, The Bionic Woman, and V, and also a number of movies of the week. His story is filled with revealing insights and anecdotes about the many stars and musicians he has lived and worked with, some funny, some sad, some appalling. Although his professional life ran smoothly and successfully, his perilous personal journey ran over rutted roads through three failed marriages and a tortured battle with booze, eventually emerging into the calm of sobriety and the exhilaration of a fulfilling relationship. Joe's book gives the reader a new, intimately known friend, whose candor and understanding will remain in memory for years to come. Be sure to visit Joe's website  http://www.joeharnell.com

Author Biography: Joe, how I wish I had your chops in orchestration and on piano! It is great that we are able to stay in touch and I often think of our various meetings through the years, all the way back to Germany in World War II. Dave Brubeck I have known and worked with Joe in many organizations over the years, and I can attest to his vast and successful experience as composer, performing artist, hard-working member and executive of composers and lyricistsorganizations, past president of American Society of Music Arrangers and Composers, and teacher in the USC film music program. Elmer Bernstein Joe Harnell has long been recognized as one of the genuine masters on the American musical scene. His career as pianist, arranger, composer and conductor spans the richest and most creative period of our country's musical life, and Joe's contribution to it has been a major one. This memoir celebrates a joyous man whose love of music radiates in his work and in the man himself and it is a privilege to salute him! John Williams