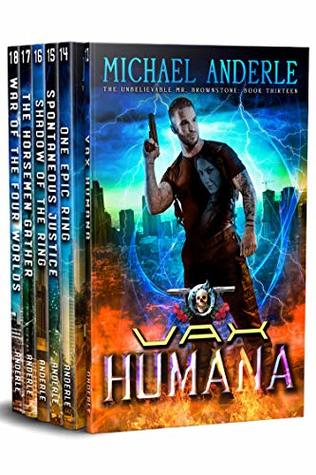 Save that MONEY and buy the Boxed Set of The Unbelievable Mr. Brownstone books 13-18

(including Vax Humana, One Epic Ring, Spontaneous Justice, Shadow of the Ring, The Horsemen Gather, War of the Four Worlds)

Vax Humana: James was raised by some good men. What would have happened if twisted cultists like the Brotherhood had found him instead of Fathers McCartney and Thomas?

It's time to find out more about the Unbelievable Mr. Brownstone.

James isn't from Earth or Oriceran. Where he is from has been a question for years.

Will we find out now, or will those who seek to kill what James can become win in the end?

One Epic Ring: “But you haven’t taken brain damage. I don’t want to have to take the time to get to know you again. The first time was exhausting enough...”

Brownstone accepts a simple job and pisses off the most dangerous criminal in LA.

Shay is approached by a powerful billionaire, one who knows her past.

Now, Brownstone is ready to provide a beat down, but Shay is asking him for help. Does he stay in LA or fly (something he doesn't like to do) to Cambodia?

There is nothing to fear but the Vax Forerunner himself.

Or is that something only aliens fear?

Brownstone is at to a fever pitch to understand Shay and create something epic, so he makes a decision to ask someone hundreds of years old.

The fight of his life and for his life is about to occur. Will he have a future when all is said and done?

Shadow of the Ring

James achieved something epic with his proposal. Now it is Shay’s turn.

In planning the wedding, the tomb raider soon finds she sympathizes with what James had to go through. How does someone top something so special?

The world’s mightiest class-six bounty hunter believes he’s conquered his amulet. The symbiont’s dark whispers no longer push him out of control, but a new enemy has decided LA should be his stomping grounds and threatens to break through James’ hard-earned discipline.

Barbecue is life.  Everything else is just details.

With his life settling into a comfortable routine and the criminals of Los Angeles finally accepting his power, James ponders a future of family and food rather than kicking bounties through walls.

Can a bounty hunter be happy as a pitmaster?

James’ idle thoughts of retirement are put on hold when a rogue group of government agents decides to go after the man they feel is the greatest threat to the country.

War of the Four Worlds

The government and the underworld have finally learned their lesson about not taking on James Brownstone, but some enemies will never learn.

Some enemies can only be destroyed.

James and Shay’s wedding is fast approaching, as is the bounty hunter’s semi-retirement. He’s ready to replace butt-kicking with barbecue, convinced he can have a life filled with something other than constant violence. 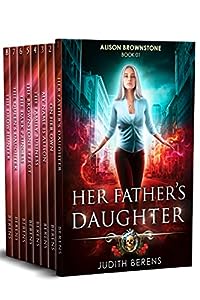 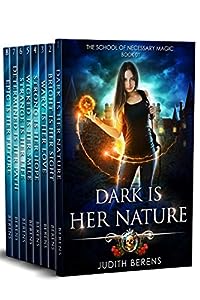 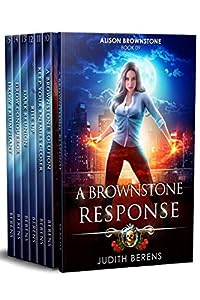 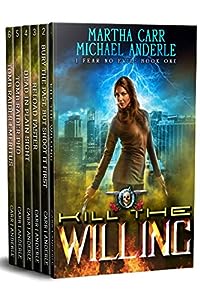 Kill the Willing, Bury the Past But Shoot It First, Reload Faster, Dead In Plain Sight, Tomb Raiding PHD, Tomb Raider Emeritus (I Fear No Evil #1-6)